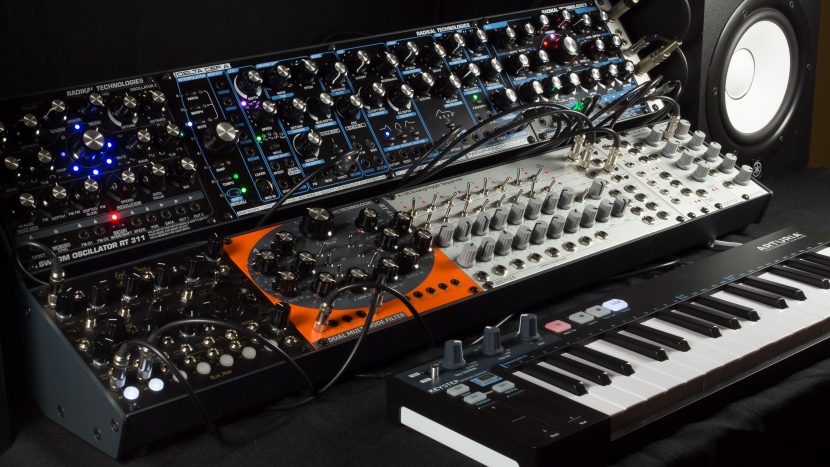 Since we presented the Spectralis for the very first time in 2004, we received requests from customers for stripped down versions of the instrument or separate building blocks like filters or the step sequencer as independent little electronic gadgets.

The eurorack format is the best possible way for devices like that. The user doesn’t need to spend any money into a box or a power supply because he already has a frame for his modular system that can feed Radikal modules as well.

The module features two of the Spectralis multimode filters. They can run independently as two mono filters but can also be used for stereo filtering or in serial or parallel configurations. The CV inputs of the first filter are assigned to the second as well as long as no cables are plugged into the CV inputs of the second filter. An extra large knob in the middle of the module is assigned to both cutoff frequencies at once.

Our second module is a DSP based swarm oscillator with parameter snapshot interpolation. The RT-311 offers two main oscillators with sweepable waveforms, oscillator synchronisation, TLM, linear FM and exponential FM. The density control parameter adds up to 7 copies of that dual oscillator and detunes them for extra fat sounds and drones.

In 2017 we presented a powerful multi FX processor with 2 selectable main effects, an independent reverbration effect, an EQ and an input saturation stage. Like the swarm oscillator, the RT-1701 "EFFEXX" module sports the snapshot interpolation feature for complete new sound transitions.